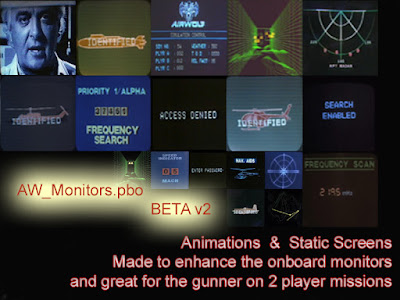 The issue with this addon is its size, compiled (it's around 980mb) as one addon, for the likes of Mediafire hosting thats 6 RAR files (free winrar doesn't do split files) so its not viable to release the ONE pbo file inside a spanned rar as users will have to buy winrar or similar to unpack it.
Then if i release the "folders" across 6 stand alone rar files people have to compile the 980mb pbo using winpbo which has mixed results on mixed CPU's (especially modern ones)  I was tempted to do smaller single addons & a scripts pbo that's smaller, easier to grab updated versions. but then they released AW on DVD in the uk  (and chance to get better lookin screens) then they released a remastered version.. thing is i killed a GFX card making these and pretty much doomed the 2nd that died on a later project due to previous use (new hardware, old software) u think it would cope better... Paintshop pro 7.04 (reboots a win98 system when outa ram) on xp just bleeds over to the gfx memory and heats it up then pop, display driver only allows safe mode and the cards dead...

I wont spend money working on a project that cant be sold, id be insane to, Nor will i ask for money, software or serials (because my systems are how i like em and for music production mostly) Im not rocking my boat for others benefits (not when i consider the input i haven't had and yet the agro i have had on top of loosing hardware) Screw that lmfao

And you can get the Help File here

Email ThisBlogThis!Share to TwitterShare to FacebookShare to Pinterest
Tags: AW_Monitors.pbo